I haven’t died. I did, however, move to a new country since the last update and utterly forget that I had this blog. In the UK so far, I have met David Cross, sat three feet away from Kevin Spacey, ordered my dinner off an iPad at a restaurant, and hopped a fence in a city farm to frolic with sheep. Those adventures will be documented in further detail at a later date.

The pub is a curious institution in England. It’s an extension of the living room — a communal space that is multipurposeful in a way that bars in the US are not. Business meeting? Post-ultimate frisbee practice socializing? Family reunion? Done with classes for the afternoon? Head to the pub.

In honour (!! look at that) of this pub-loving culture, I break my blogging hiatus to tell the tale of the Monopoly Pub Crawl, a 12-hour-long escapade I organized back in March, during Lent break. The Monopoly Pub Crawl takes place along a fairly well-established route. It involves visiting a pub on every street represented by a space on the original London Monopoly board. You start south of Tower Bridge, then spiral inwards and counterclockwise towards the city centre, ending at Oxford Street.

It was a rainy Tuesday morning. The crew convened at the first pub at The George just off Old Kent Road at 11 AM sharp. When we asked the bartender to sign our board, she was bemused that we were attempting the pub crawl on a Tuesday. Turns out most people do it on a Saturday..

We gave ourselves about twenty minutes at each pub early on in the route, because the pubs at the beginning are spread out farther apart than the ones towards the end. Here we are at Stop #2, Fenchurch Street: 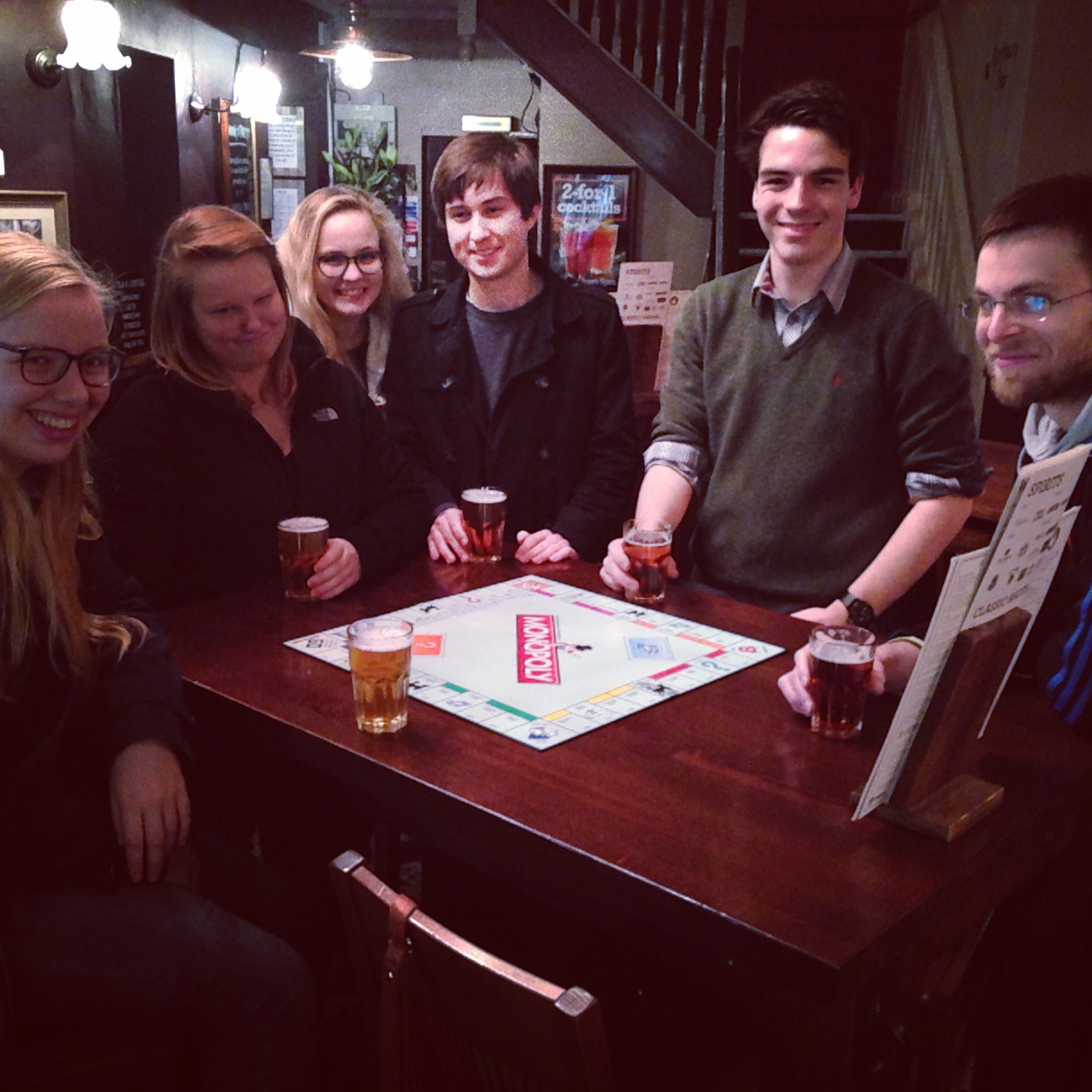 Our numbers grew as more people finally woke up and caught up to us on the route. The people you see above, though, are the only ones who were there the ENTIRE TIME (and me, but I was taking the picture). Below is the group at its peak size, I believe we were getting on the tube to head north towards King’s Cross about 1/4 of the way through: 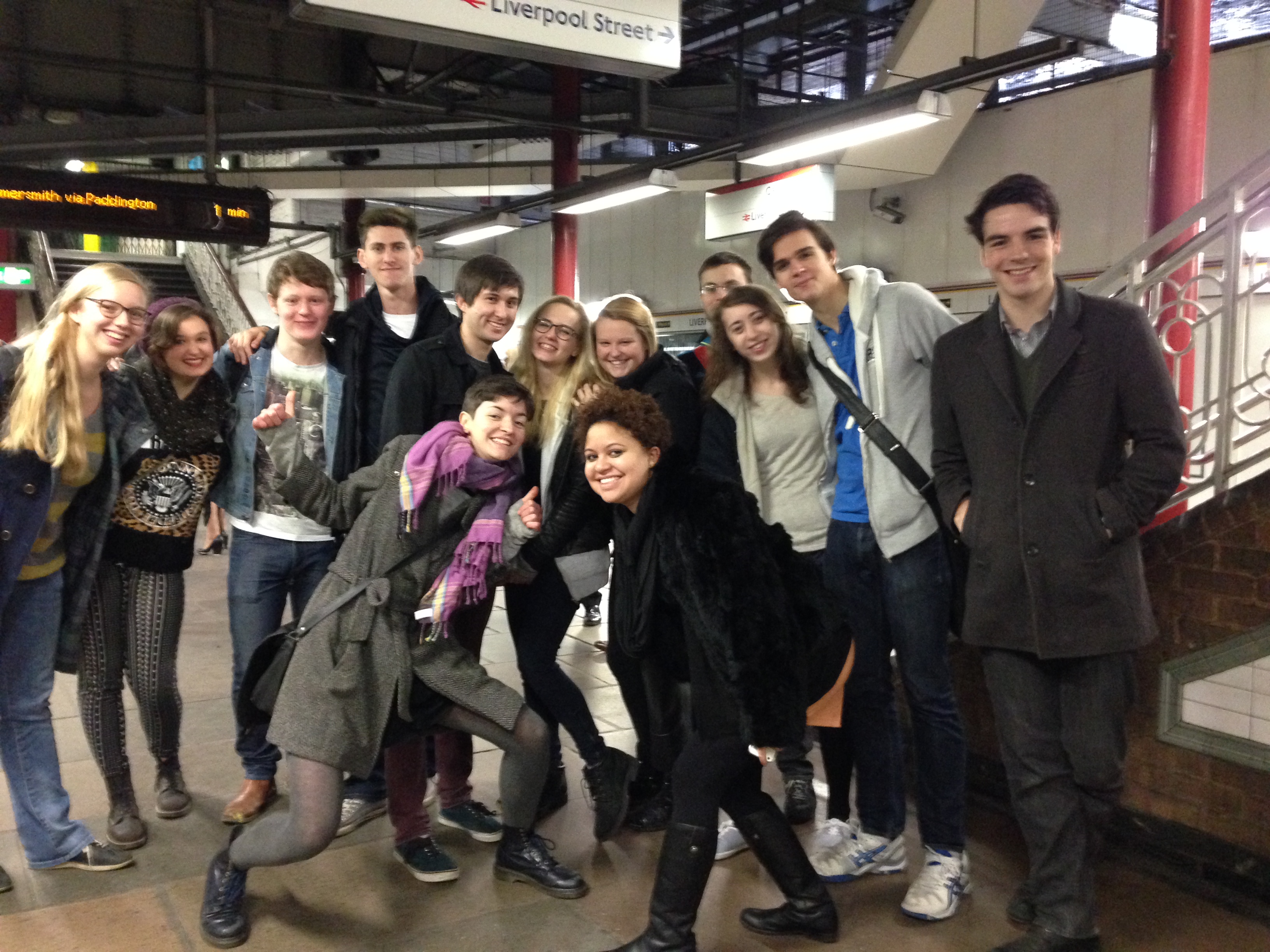 The Monopoly Pub Crawl took us into the most obscure old man pubs that London has to offer, including this little Spoon’s tucked away in the back of Liverpool Street station. (I think.) 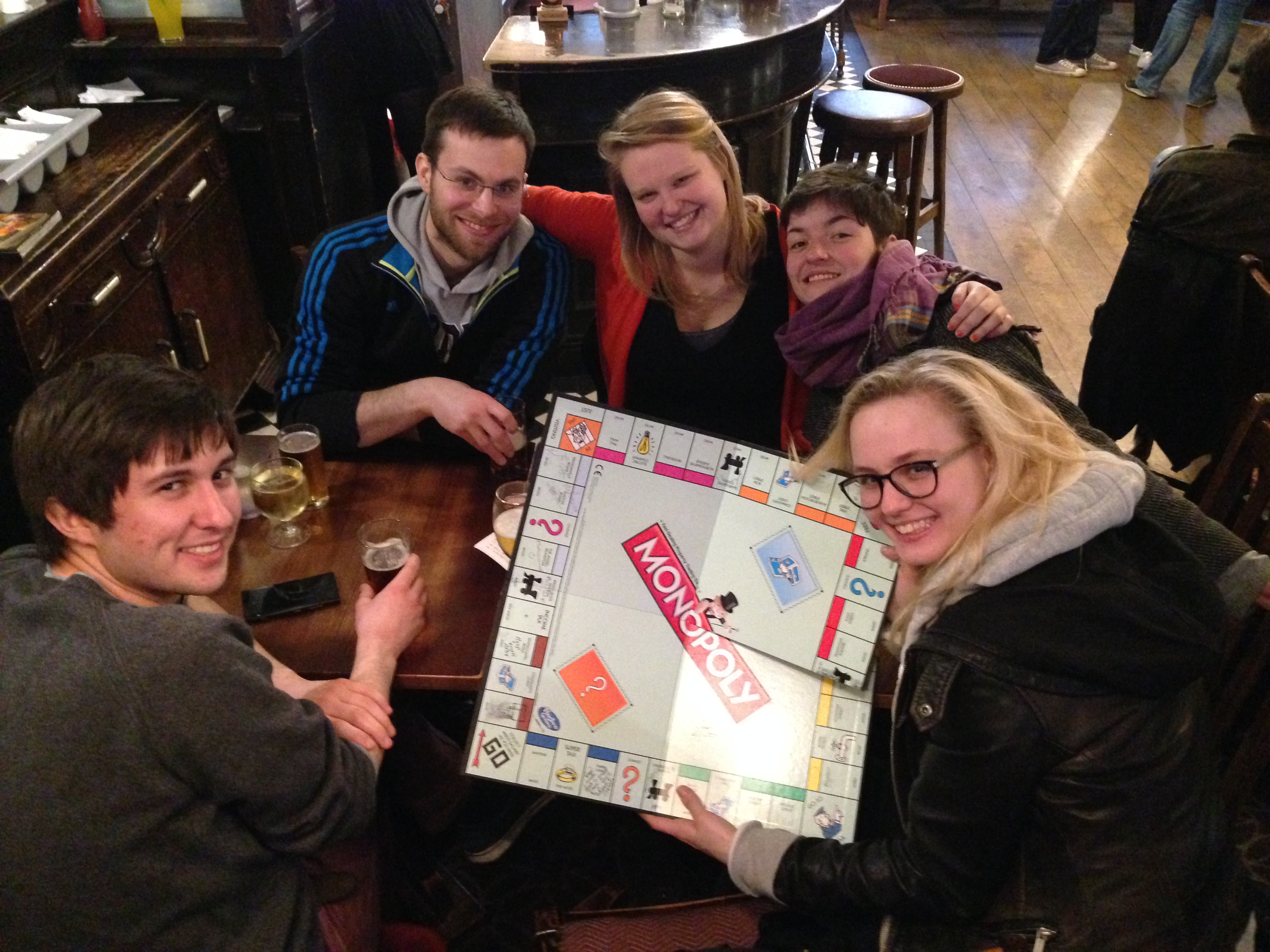 The Monopoly Pub Crawl doesn’t actually budget any time to sit down and eat. You can imagine this creates a natural problem — aggressive pint-chugging with no food to offset the effects. We subsisted on pasties, hot dogs, fast food hamburgers, burritos — basically whatever we could grab, usually at one of the “railroad” squares — stations like King’s Cross. 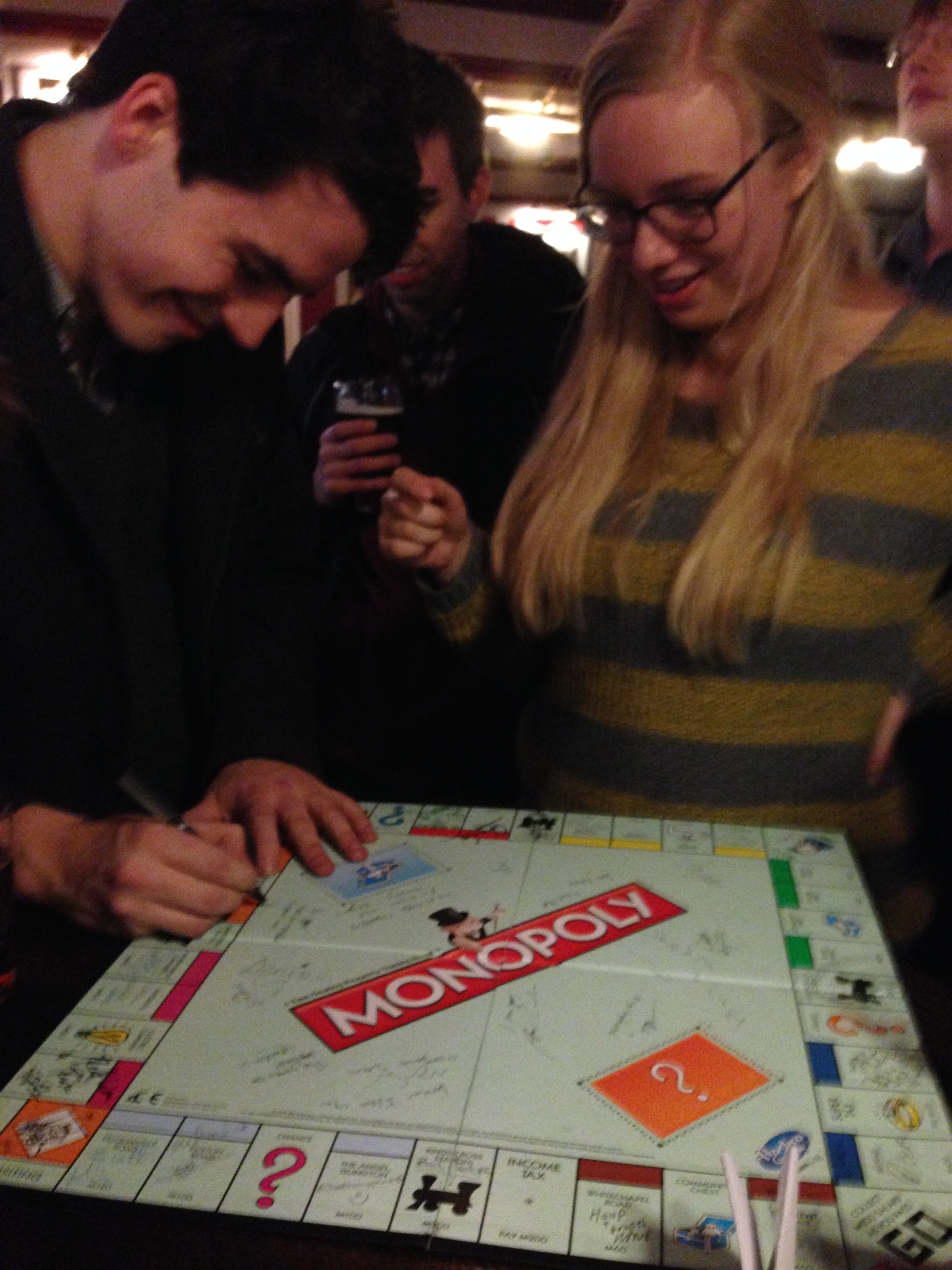 In addition to collecting signatures from barstaff, we had each of our fellow crawlers sign in the center of the board. I went back and tried to count the signatures and figure out who had been there, but, unsurprisingly, after drinking for nearly 11 hours straight, the writing was illegible…

Because there are no pubs in the central stretch of Oxford Street, we settled for a pub called The Spread Eagle just to the south our final stop. The rules of the pub crawl are that you must have at least a half-pint at every pub, but most of us had stopped drinking by pub 15 or 16, opting for water or soda in the interest of our livers. However, Chris and Saskia, the freshers, powered through and made it all the way to the end!! God bless them and their livers. 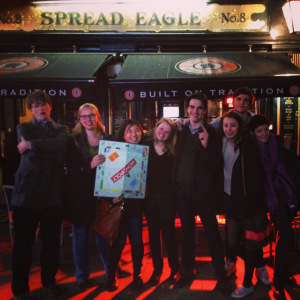 Would I recommend the Monopoly Pub Crawl? Yes. Absolutely – it is a fantastic way to bond with friends and make new ones, and you will explore new parts of London. You will also become really good at taking public transit while drunk. Unexpected things will happen, and you’ll probably not remember most of it. Wear comfortable shoes and bring a phone charger. 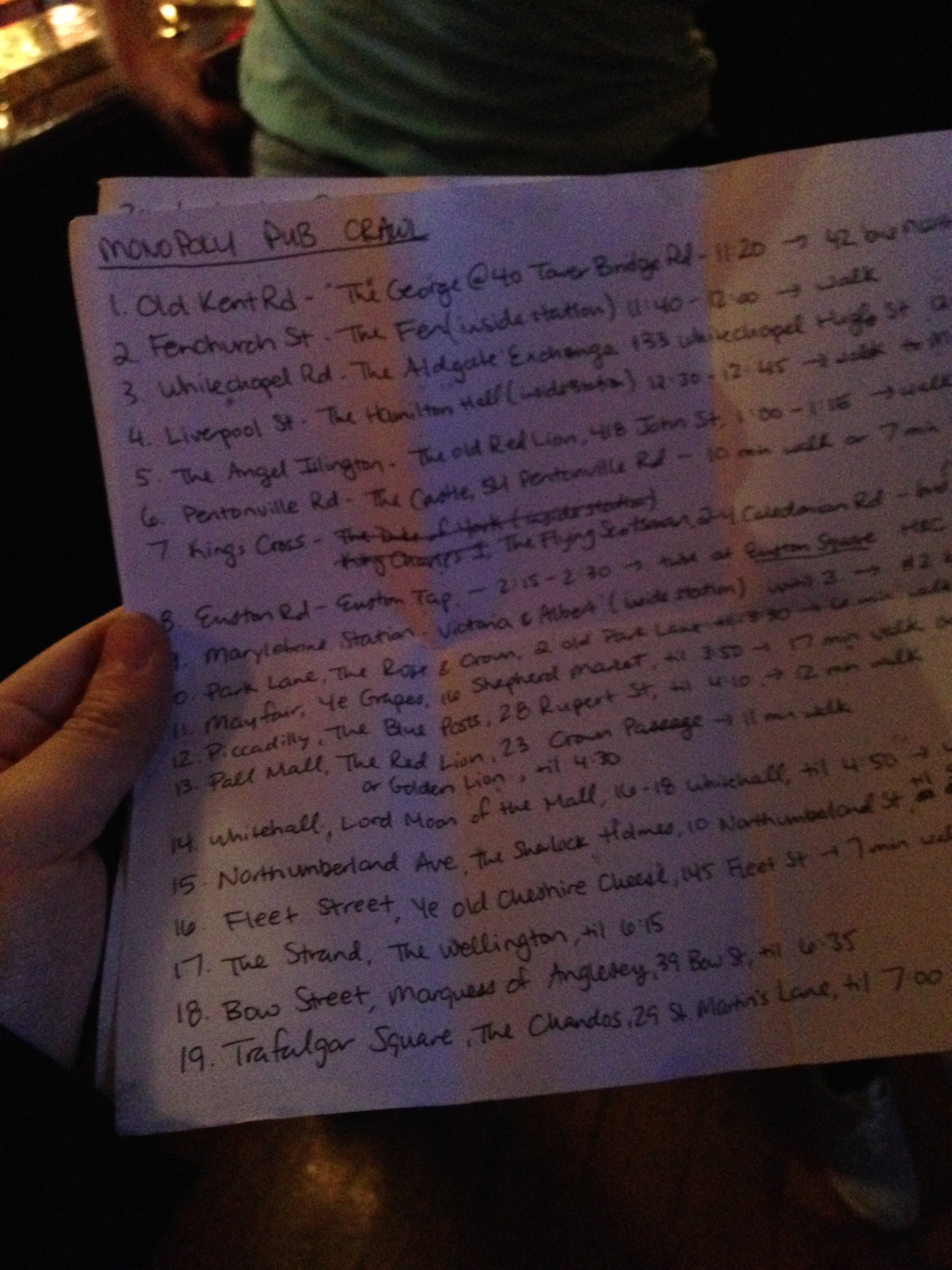 A partial list of our destinations, hastily scrawled that morning. 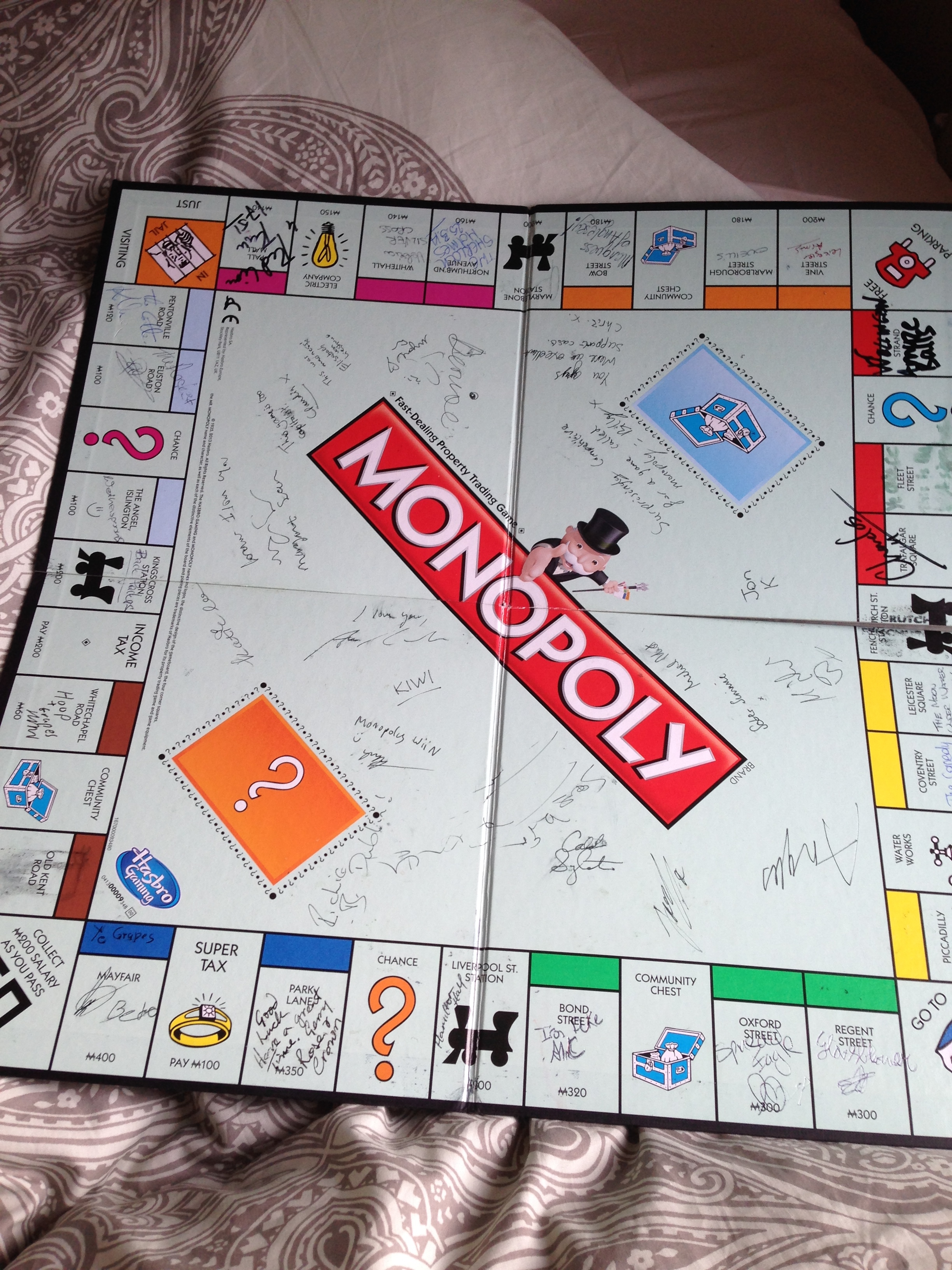