I drew all* 84 people I work with as Golang gophers. Here's what I learned.

Recently, I embarked on a fun, but ambitious and masochistic endeavor of trying to draw each of the 84* people I work with at Pivotal R&D in the Toronto office as a Golang gopher. Was it a super fun way to get to know my coworkers? Absolutely! Would I do it again? Probably not.

*I started this project in February, and completed it this past week. In that time, people have left and joined. I included some folks who have since left, and did not include folks who just joined. I might do a follow-up batch later on, when I’m less burned out!!

The Gopher is the official mascot for the Go language. Here’s a blog post about its origins! Renee French designed the gopher several years ago, and since then, many talented artists have riffed on the form, notably, Ashley McNamara, Egon Elbre, and many others.

In a sub-organisation of 84 people, it’s hard to get to know everyone. I didn’t know everyone when I started this project. I still don’t really know everyone, but now I can say that I have had at least one conversation with every single coworker, even if it went, “How should I draw your gopher?” Getting to know everybody a little better was lots of fun.

I drew everything in Procreate, on an iPad Pro with Apple Pencil. Beyond the Master Pipeline batch, which was all freehand, I drew one gopher outline, duplicated it into an evenly-spaced 3x3 grid, and stuck to that basic potato shape for 72 gophers. That’s why some of the Master Pipeline batch, such as Josie, Derwei, and Yash, have slightly different poses from the straight-forward pose that the others have. 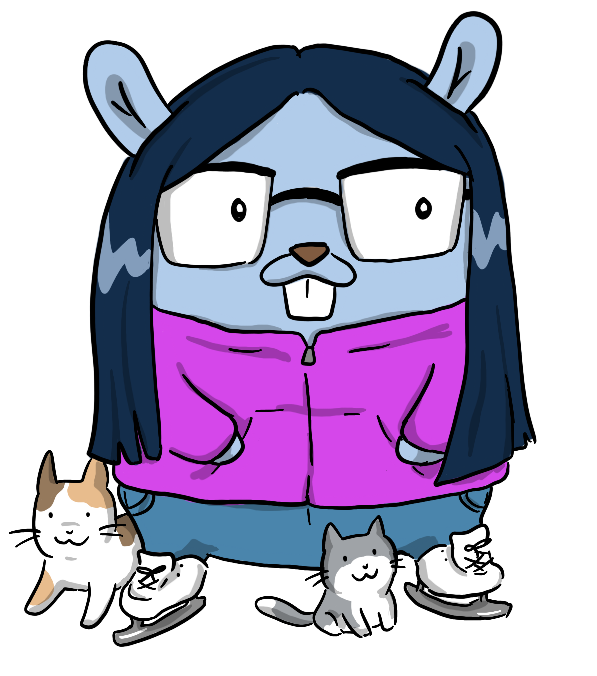 When I started out, I had less confidence in my ability to artistically represent everyone, so I started with people who were well-known for some physical characteristic, or hobby, or style of dress. In cases where these characteristics would be key identifiers, I leaned into the caricature and amplified those traits or behaviours. For example, it’s commonly known around the office that Brenda does a crazy amount of CrossFit, so she obviously had to be performing a cartoonishly heavy deadlift. Lyle frequently wears a black hoodie and basically functions on coffee from our local favorite, Fahrenheit, who sell all their coffee in cups with a distinctive red lid. Lindsay is the only person in the office with long, platinum blonde hair and frequently dresses in monochromatic black, as designers are wont to do. Raymond wore the brightest red Canada Goose jacket everyday during the winter, and has a distinctive streak of white in the front of his hair. Renee likes to wear oversized sweaters, jean shorts, and tights, and always has a big, kind smile on her face. 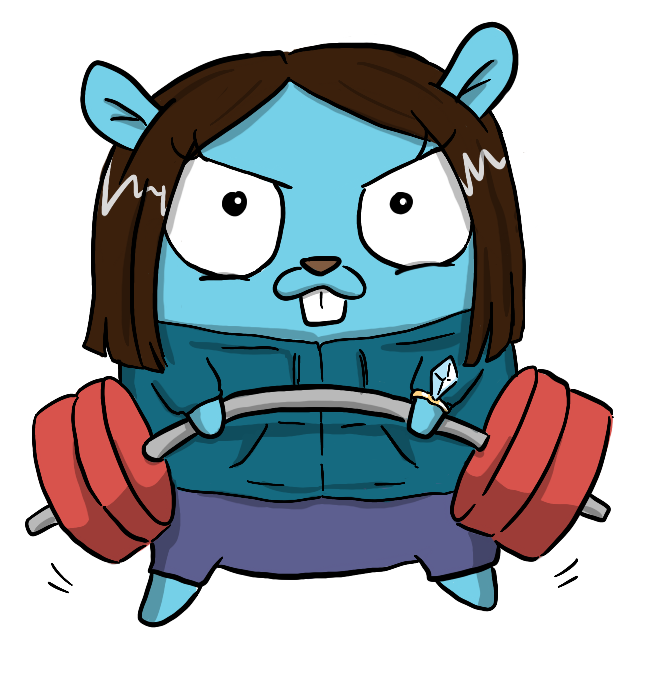 To some extent I accepted input from the subject or from vocal people around the office. In my opinion, the funniest gophers (Parv, Winters, Tanzeeb) were ones with input from other people. All of these were hilarious because of inside jokes that were somewhat known among folks who worked at the office for years. I decided to immortalize and surface these jokes, since they were not harmful, and could potentially help break the ice for newer joiners later on with some Office Lore. 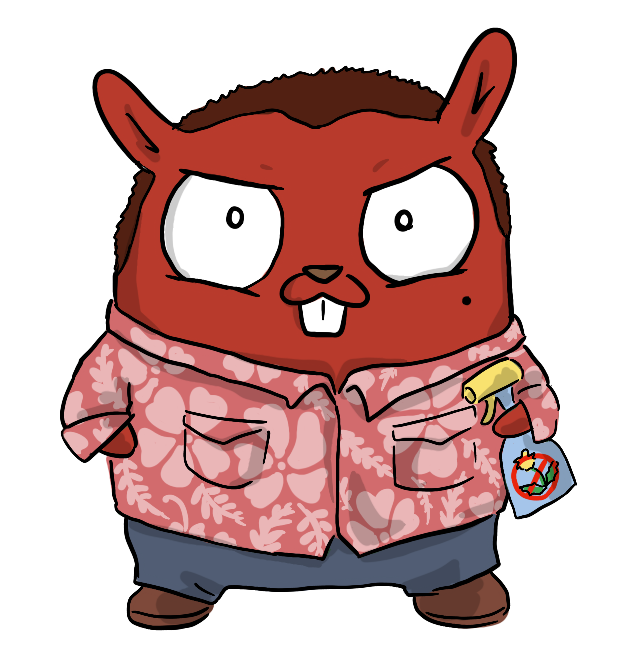 I also made a decision early on to make every gopher the exact same body shape, so height or weight, which can be sensitive topics, would never factor into the representation of a gopher. Some people are known for being tall or short, so this made things difficult at some points, but I think overall this trade-off was positive.

I drew the first twelve gophers in February. At that point, I hadn’t intended to draw the entire office. I just wanted to draw my team, Master Pipeline, as gophers, and there were 12 of us, including Izabela who was away on leave. Besides Izabela, I decided not to represent children or parenthood, but I included dogs wherever possible, just because I love doodling cartoon dogs. The most un-guessable gopher in the entire set is Yash, because he’s possibly best-known for taking photographs with people’s dogs, and he requested to be drawn in a navy suit which has never worn into the office – and I relented. I shouldn’t have. Yash, if you’re reading this, I’m re-drawing you in the next batch as a gopher with its arm around a husky, and an “Old Fashioned” in your other hand. 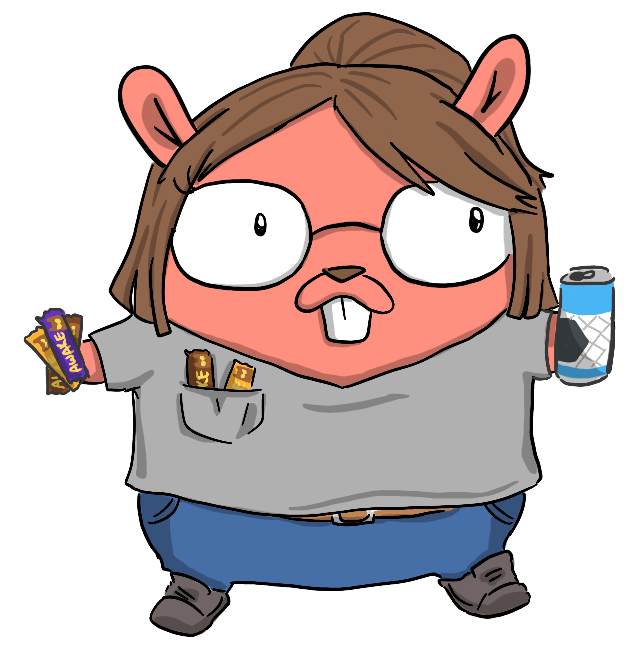 Sera, part of Batch 4. I asked Sera if she was okay with her main quality being “caffeinated”.

The later gophers came out more polished-looking than the earlier ones, for the simple reason that my line work improved as I drew 84 variations on the same character over and over again. For some early gophers, I was really unhappy with the original line work, that I went back and redid them. But I tried to resist this temptation, because I was trying to prioritize finishing the project. 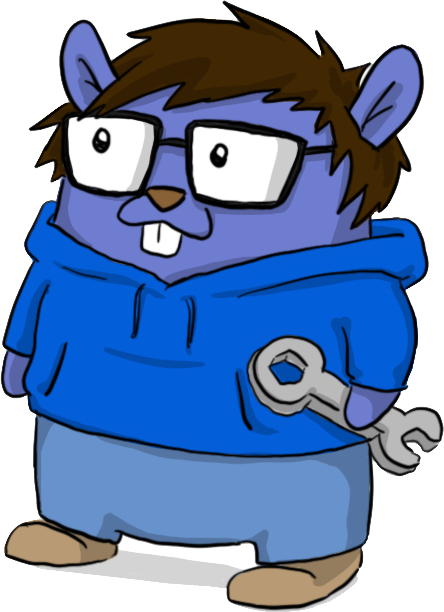 Sometimes when I wasn’t sure if a gopher would be guessable, I added a pin, shirt logo, or insignia in some form that represented the team that the person was on. This wasn’t perfect, and we switch teams fairly frequently, but I’m sure it boosted guessability in more than one case.

I tried to be conscious of not representing all the women gophers with stereotypically feminine, pastel colors, unless outward femininity was part of that person’s style. Similarly, not shying away from pastels and pinkish tones for male gophers. 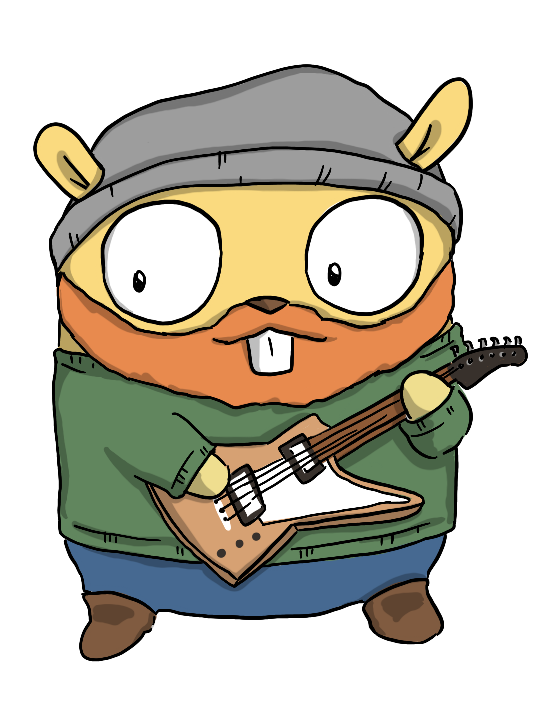 In a few cases, I chose gopher colors that would compliment an outfit I had in mind already for that person. For example, I knew Jateen is a huge Maple Leafs fan, so he had to be in his Leafs jersey, so a slightly muted dark red would contrast nicely with the bright blue of the official Leafs jersey. But mostly, since I was doing these in batches of 9, I tried to balance out the colors within each set, so that overall there’d be a roughly even distribution of warm and cool tones, saturated and muted tones, dark and light tones. I think I naturally gravitate towards cool tones, especially blue, so it’s likely that blue is overrepresented in the rainbow stripes. I also generally stayed away from peach, light orange, and tan tones, because I thought it would be weird for gophers to have human-like skin tones. 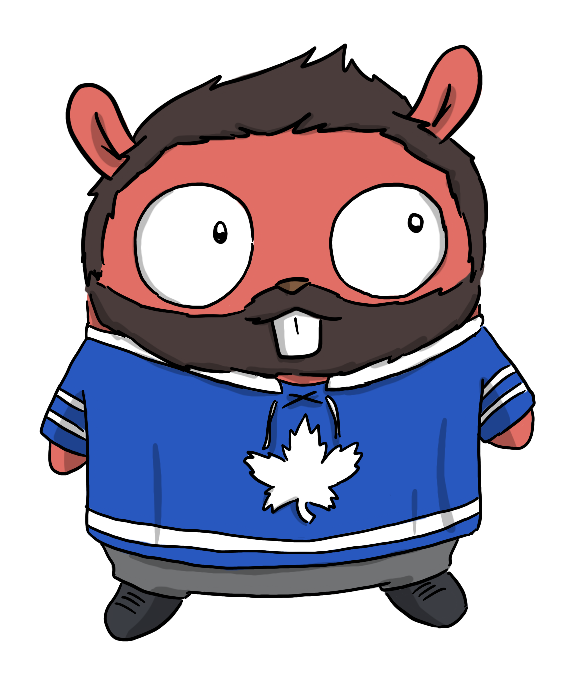 I really enjoyed trying to get people’s hair accurate. Women’s hair is generally easier for me to draw, because there is a wider range of dramatically different ways to style women’s hair – which translate well into cartoons. I’ve always found drawing men’s hair to be tougher. I remember back in high school when I used to draw a lot of anime characters, I more or less made all the male characters have the same hair. Since I work in tech, there are lots of guys in my office and I wanted to at least try to show the difference between longer and shorter, silkier and thicker, straighter and wavier hair. I initially started generally trying to get the correct shade of brown for people’s hair, but I soon realized that almost everyone has brown hair, so in cases where dark hair wouldn’t be a “differentiator”, I played around with choosing darker non-earth tones, such as navy, maroon, and forest green. 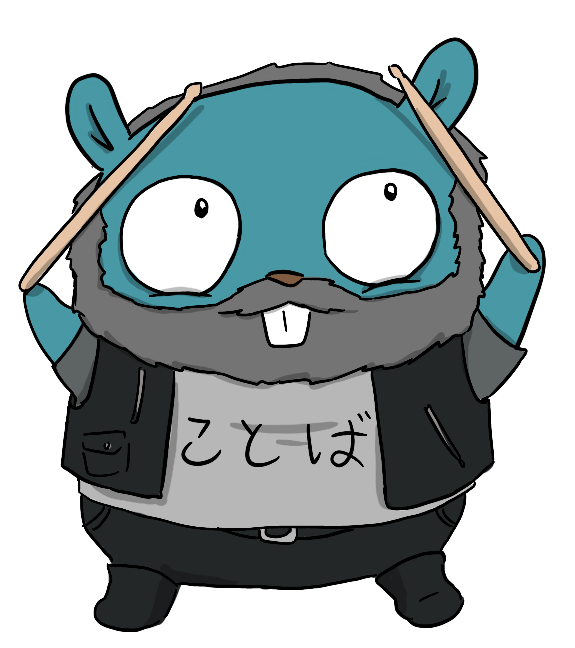 Facial hair was also interesting to model on gophers. Drawing sideburns is almost impossible, since gophers’ ears are at the top of their heads, and sideburns really depend on being positioned in front of the ear in order to be recognizable as sideburns. So, in cases where people had sideburns or a thin strip of short hair that joined up into a beard, I just kind of faked it by ending the hair lower, and starting the beard higher. It was really tricky to think of how to model people with closely-shaven beards, so in those cases, I generally just left the beard out. For mustaches, I replaced the gopher’s muzzle with a fluffy mustache that usually joined up into a beard. 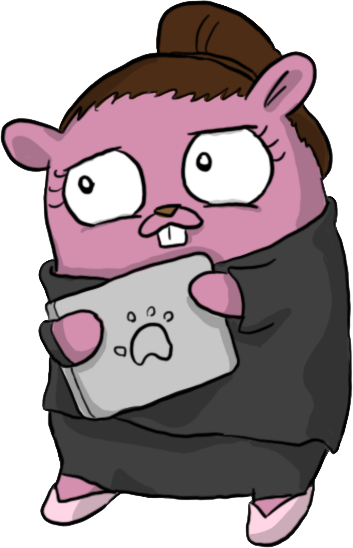 In the future, if I were to mass-draw gophers again, I would change up my base template to have a couple different poses. Having everyone face forward was a little boring!

You can view all the Toronto R&D gophers in this public Google Drive folder.